Welcome to my review of The World Is Not Enough, the nineteenth part of my challenge to review all of the James Bond films. I’m watching each film in turn and trying to figure out which one is my favourite. For more information, see my introduction here. You can read my review of the previous film, Tomorrow Never Dies, here. Spoilers follow. 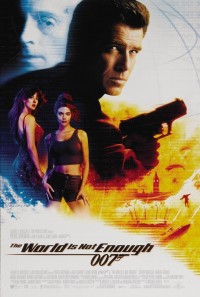 I’m going to assume that anyone reading this has heard of the phrase, “willing suspension of disbelief”.

The Bond franchise is built on the suspension of disbelief. The fact that we can swallow the scenarios it throws at us is the key to its success. In the course of this challenge, I’ve watched—and, for the most part, accepted—that a man with metal teeth can bite through steel cables, that MI6 really might weaponise an Aston Martin or a Lotus Esprit, that an army firing machine guns can’t hit a man running across an open field, that the easiest way to steal a spaceship is to build an even bigger spaceship that can eat it.

No matter how hard I try, I cannot accept Denise Richards as a nuclear physicist.

Look, I’m sure that there are—indeed, I really hope there are—female nuclear physicists. I’m willing to accept that some of them have big round breasts and full lips, because beauty is no barrier to brains. But Richards is a different creature altogether. With her vacant eyes and mouth that tends to hang open when she’s thinking, she looks like a blow-up doll.

The counter argument to this is that the Bond films have always been about the male fantasy, starring impossibly beautiful women. And that’s fine, if we’re honest about it. Yes, I’ve complained about early Bond films being a bit sexist and talked about 007’s magic penis. But there’s something about Richards in The World Is Not Enough that makes my brain stop with a loud ‘no’.

She’s not the only girl I can’t buy in the film. There’s a doctor, ludicrously named Warmflash and played by Serena Scott Thomas, who looks like a supermodel and who wears sexy lingerie while working. She looks out of place in the sombre Scottish mansion that MI6 seems to be using as a base, despite the fact that a funeral for an oil tycoon has just taken place outside. Who owns the mansion, then? Did the tycoon simply request to be buried near a Government hideout?

The World Is Not Enough is not a clever film, although it’s not really a bad one either. In many ways, it’s another collection of action scenes with a paper-thin plot stringing them together. For example, the pre-credits opening is 15 minutes long and has an incredible motorboat chase along the Thames. Why does this happen? Where is the London Metropolitan Police Force with their own speedboats? Bond is chasing after an assassin for whom, exactly? The target is dead already, blown up by a bomb that required him to stand directly over it to detonate. There is no reason for a sexy woman with a sniper rifle to even be there.

And so it is with the rest of the film. Enemies whose plan would work if they only kept their heads down insist on opening fire on Bond at every opportunity. There’s a fantastic ski chase, where Bond is followed down a mountain by airborne snowmobiles. It’s brilliant, yet baffling why the bad guys even bother.

This film is a marvel of spectacle over substance. Of course, the whole series is this to a lesser or greater extent, but—like Denise Richards—while The World Is Not Enough looks fantastic, it’s clearly dumb as a plank.

Thank God, then, for the supporting cast. Sophie Marceau is electrifying, in particular during the final third of the film, and it’s no surprise that she’s regularly voted one of the best Bond girls in the series. Robert Carlyle, meanwhile, brings an oddly dignified gravitas to his role as a terrorist who is gradually losing his physical senses thanks to a bullet lodged in his head (I guess a bullet was a sexier option than giving the character leprosy, which would have had much the same effect). Sure, he’s an anarchist who is helping an oil tycoon get even richer, but that’s just the plot being dumb; Carlyle himself is great.

Robbie Coltrane returns as Zukovsky, last seen in Goldeneye, and somehow manages to provide both comic relief and dramatic flair—his final scene in the film is one of the best moments in the franchise so far. And then there’s John Cleese and Goldie, who… well, they turn up and collect paycheques.

And Denise Richards… damn it, why did they put her in here? Her acting aside, her character is pointless: she stops Bond fulfilling his mission, then hangs around and does nothing except get in Bond’s way. Her only real purpose is to provide a crap Christmas joke in the closing moments of the film.

Sadly, this was to be Desmond Llewelyn’s final film as Q, but at least the filmmakers took the time to give him a proper send-off; his departure is poignant and true to the character. Llewelyn died a month after The World Is Not Enough was released.

I’m sounding rather negative here, but the truth is that The World Is Not Enough is a fun two hours. Unfortunately, even as part of a series that hardly taxes one’s grey matter at the best of times, it is also unwaveringly stupid.

Title song: A confession: I am–and was when the film was first released–a huge fan of Garbage, so their The World Is Not Enough is easily one of the greatest Bond themes for me.

Best gadget: The X-ray glasses that Bond uses are particularly cool. Aside from the scene where he’s walking around a bar eyeing up the heavily-armed women, there’s also a moment earlier–before we know what the glasses actually do–where he smirks at John Cleese while wearing them.

Best quote:
Zukovsky: I’m looking for a submarine. It’s big and black, and the driver is a very good friend of mine.

Most obvious product placement: BMW again, although at least this time the Z8 looks like the sort of car Bond might actually drive. Bearing in mind that the film was released in 1999, London’s Millennium Dome (now the O2) counts as well: for a long time, the fact that Bond landed on the Dome was the most exciting thing you could say about it.

Verdict: It used to be that I preferred The World Is Not Enough to Tomorrow Never Dies, but on rewatching both films I’m reversing my position. As stated above, The World Is Not Enough is by no means bad, but Denise Richards and the general idiocy of the film make it a tough one to recommend too highly. It only beats The Man With The Golden Gun by virtue of the fact that, bad though Richards is, she’s still not as crap as Agent Goodnight.

Okay, I know I’m not going to enjoy Die Another Day, so rather than ask whether it’s a good film I’m going to go with a more realistic question: is it worse than Moonraker?